Socialisation could be defined as a process of learning to behave in a way that is acceptable to others and therefore being able to fit into society.  This is as important to dogs as it is for people as both species naturally live in highly social groups.

When people acquire a puppy, usually at eight weeks of age, they are often advised to keep it confined to the garden until it has completed its immunisation regime. While this may help to protect the dog from disease, it does nothing for its psychological welfare. Extensive research on canine behaviour over a twenty year period by Professors John Scott and John Fuller has proved that there is a critical period for socialising dogs and that this occurs roughly between three and twelve weeks of age. Every year many thousands of dogs are destroyed because they develop bad habits which their handlers can’t control.  This is often due to a lack of socialisation and early training.  Lack of socialisation can cause temperament problems such timidity or aggression.  However it is never too late to socialise your dog and this should continue over your dog’s lifetime.

Ideally if you have a young dog you should encourage your puppy to play with other healthy, immunised puppies in areas which are unlikely to be contaminated. Of course your puppy should have started its immunisation regime first.  In reality you are just as likely to track something like parvovirus into your house on your shoes as you are to expose your puppy to the virus in the park or on the beach. And just think how many bugs there are in a hospital and probably in a veterinary surgery! However, obviously, we are not suggesting that you cease going to your vet! We just need to strike a balance.  We have had numerous veterinarians attend for training.  They obviously recognise the importance of socialisation as well as attending to their puppy’s physical health.

It is never too late to start socialising your dog if you have already missed the early months for whatever reason.  Many people adopt older dogs for example.  It may be advisable to walk your older dog with another dog that you know is temperamentally sound.  When dogs are moving they are generally sniffing and exploring and are less focussed on each other.  This should occur in a “neutral” area rather than in your garden which an un-socialised dog may regard as “his” or “hers”.  You should avoid getting into tight spaces like gateways together until you see how the dogs are reacting to each other.  Sometimes it is beneficial to have an instructor to help you through this process.  It is better that both dogs are off lead but this means you must either have a good recall or you introduce the dogs in a large safe area like a fenced park.  Dogs should be socialised to all types of different species if possible especially if they live around other animals or visit country areas. 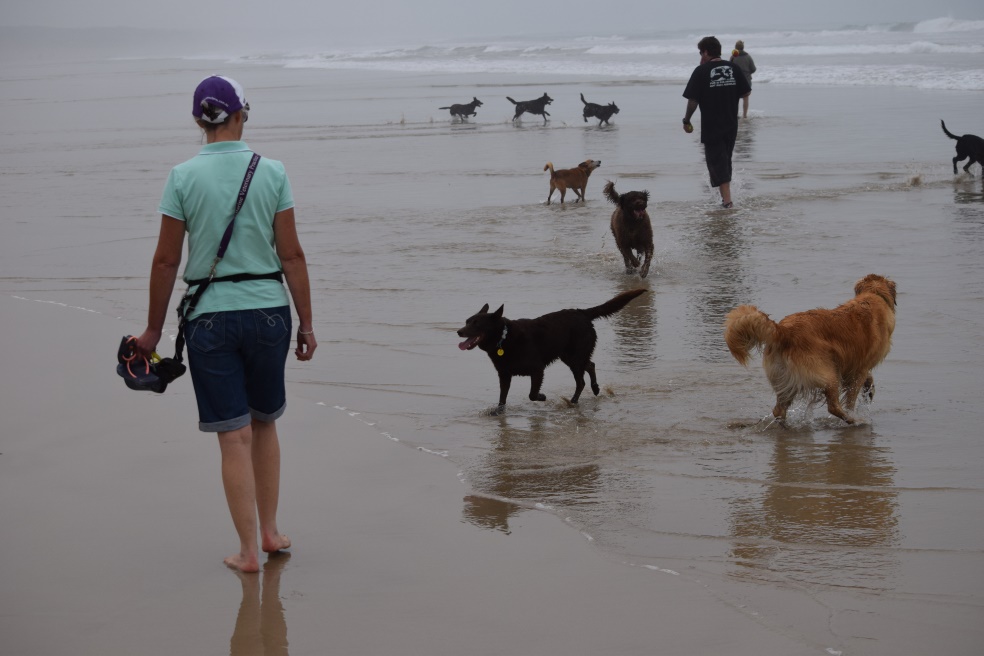 Dogs and people strolling on the beach

Habituation is the “get used to it” concept. If we are repeatedly exposed to something like a particular noise in the environment or a particular odour, we learn to stop responding to that sound or odour and we no longer regard it as a potential threat or annoyance. If we didn’t do this we could potentially be in a state of hyper alertness or anxiety.

You can therefore see that puppies and dogs need to be habituated to all the sorts of sounds and situations so that they learn to relax in most situations. Many dogs react to the vacuum cleaner, motor mower and things on wheels!

We can teach you techniques on how to keep your dog calm in various situations and hints on what you can do if your dog has a problem with noises, fast moving objects or other dogs.